Planning and organizing are, shall we say, not my forte. I get things done primarily by sheer force of will and the ability to stay maniacally focused on whatever I’m doing until it gets done. But I’ve never been much of a list-maker, an ahead of time things-doer, or even any sort of reasonably organized person.

But now that I’ve returned to work, all of that is going to have to change. Because I am now juggling my fitness and running commitments (and it is an important one to me – keeps me from losing my sanity), what has essentially become a full time job as a freelance marketing consultant (you can follow that link to see the bare bones website I spent about an hour on one night), and my duties as a wife and mom – all of which I am currently doing without benefit of regular child care with kids that have not yet returned to school.

You may be wondering how it came to pass that I am working without having bothered to arrange for child care first. You may want to return now to read the first paragraph about the not planning thing.

What happened was, I sort of accidentally fell into this job. I put my profile up on a freelancing site thinking it would take me a few months to find enough work to stay busy. Instead, it only took me about 10 days. I know this is not everyone’s experience and that I am actually really lucky. But the thing with freelancing is, you don’t really like to turn away work because of the fear that clients will go to someone else and then not be around when you need the work. And so you end up taking more on than you normally would.

And then you end up trying to figure out how to squeeze in your daily commitment to exercise, your personal hobbies and interests (such as this blog), talking to your kids and husband, being available for them when they need you, and other little things such as the preparation and consumption of food.

We had Hamburger Helper twice this week, and one day we had frozen Salisbury steaks and Mac and cheese (and were damn glad to have it).

All of which makes me realize that I am going to have to get a lot better about planning and preparing meals ahead of time.

And I also realize that I barely know where to start. Anyone out there got any good tips out there for juggling all this? Any good ideas for weekday meal preparation? I’m making friends with the Google on this topic but am also open to advice.

A clean house is apparently just a canvas for my children to defile. We had a cleaner in this morning and 15 minutes after she left, I had to sweep up a giant pile of dirt. Seriously? I give up. Oh who am I kidding, I gave up on having clean floors a long time before today.

Oh well. Life will go on and my floors will be dirty and that is just the way that it is.

My return to running has been slow. I still feel the ankle is off, though there’s no pain. So for the foreseeable future I will only be running a couple of times a week. I’ll just have to do a lot of cross training instead. I am actually having to stay out of the pool now also, because it was giving me a chemical burn on my scalp. I guess I am just a delicate little flower.

I mentioned in my last blog post that I had returned to working part time. Well, that has been going gangbusters. I think I must have a hard to find skill set (can write, understands technology things) because I have found several great clients who are going to be keeping me busy for the next few weeks. Which is great news for me, not such great news for my kids. Apparently when you are a mom, you can’t just decide “I’m going back to work” without advance planning. Because when you don’t have a babysitter, and your kids are used to having your full attention, it is a hard transition for them when they have to entertain themselves. I hope they will get better at it. But also, I think if I am going to be this busy I need to hire someone to help. Nice problem to have!

Since I’ve been working again, I can see that my old workaholic tendencies are still latent – though to look at my house you would never know I am a type A person. I guess bottom line is that I don’t care about housework unless someone is coming over. I am externally motivated – and anyone who knows me knows that this is true. I’m what my grandfather used to call a springbutt – that kid in school who has all the answers and always has their hand in the air. Volunteers for everything. Gets good grades to validate their own existence. I love any opportunity to measure my worth in another person’s opinion. Runs races to prove to themselves that they are faster than the majority of other people in their age group (or, you know, if I was fast enough I’d be trying to win – I take whatever validation I can find I guess!)

A psychologist would probably say that these are not good things, but the good news is, it does make me good at my job. And motivates me to run, too!

Today I had to take my cat to the vet, and one of my kids to the doctor. The kid just has a persistent cough (post nasal drip seems to be the culprit). The cat was peeing blood in what seems to be a long-term recurring battle with urinary tract infections. The vet trip was the more stressful of the doctor visits given that peeing blood is usually not a good thing and he is an old cat. Plus we have sort of a policy on cats which is if they need more than $1,000 in veterinary repairs, they are totalled.

Let’s step back in time to twelve years ago, when I acquired a cat by the name of Asher. He was howling away inside of a box at Starbucks, where he was being given away by a young mom who couldn’t keep him because apparently, he kept attacking her kids. Being a single-ish (dating but not married) over-30 lady, and not having any kids at the time, I saw no problems with this behavior. All I saw was a cute, grey, über-fluffy cat about a year old, and in need of a home. I had a home in need of a cat. What could go wrong?

Well, the first thing that went wrong was that my boyfriend (later to become my husband) didn’t like cats. I didn’t consider this a problem and figured his dislike of cats could be overcome simply by spending more time with one, petting it and smelling its soft, warm fur. Which sounds good in theory unless a) the person in question dislikes and is also allergic to cats and b) the cat in question is the kind that bites when you pet him or try to put your face near his body. Both of which turned out to be the case. The cat didn’t help matters by being the sort that specializes in sneak attacks and stalking and pouncing on passing legs like they are some wily prey.

Over time, the husband and the cat came to an uneasy truce, but the balance of power is still a fragile thing. Violence occasionally erupts when the cat decides you’ve petted him too long, or you’ve invaded into an area that he has determined to be his territory (such as sleeping in the linen closet on top of the towels). As a long time cat owner, I just naturally know how to deal with these situations (keep petting sessions brief, distract the cat with the left hand while grabbing towels with the right). But these things are harder to explain to husbands and small children who lack a natural affinity for dealing with felines. My older son and I are both pretty good readers of the cat’s mood. Little brother and my husband are not. Which leads me to the conclusion that some people are just “cat people,” and others not – just as some cats are “people cats.” Mine, again, is not.

That all said, the cat has come up in our family’s estimation in recent years given how well he has handled the transition from a household without children, to one with 2 active, rambunctious and grabby little boys. Well, one of the boys is grabby – the other as I said is just naturally a better reader of the cat and handles him better. The cat has taught the other one to have respect and give a wide berth because if he doesn’t the cat bops him. He’s never hurt him, just “gotten his attention” with a swift paw to the face.

We always refer to Asher as the “worlds most expensive free cat,” because he is prone to UTIs, and various other veterinary ailments. The veterinarian refers to him as the cat from hell because he hates the vet office and everyone in it, and when they handle him he has to be handled in the same protective gear they wear when dealing with vicious dogs. So after dropping off the cat to be checked out, the first call I receive is to ask if they can sedate him. Of course, knowing how he is, I said yes.

Ultimately, I got the call that Asher would be okay, and that he just needs to be on more expensive food to help prevent further UTIs (of course). But even though he is how he is, we realized how much we would miss him if he were gone…so maybe we should rethink our limit in cat repairs. Even the husband realized that the cat adds something to our family – and not just hair balls and vet bills. 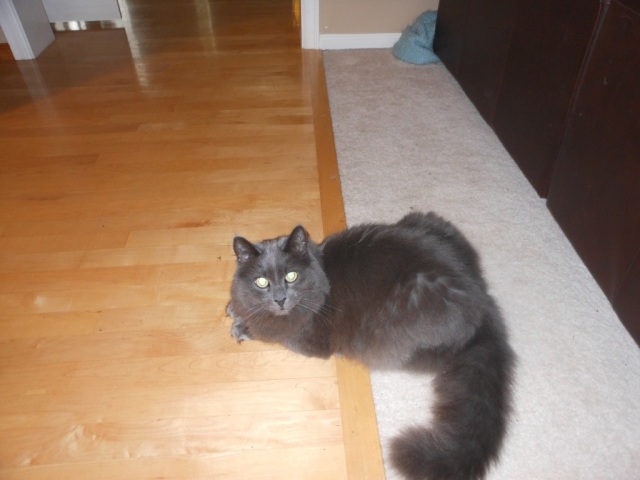